When people respond “to all” to an e-mail message that really doesn’t require responding to all, I want to respond to all saying “don’t respond to all.” This, in turn, will spur responses to all from others, who, meanwhile, inadvertently expand the network to new people, who chime in with indignant messages to all, such as “Please take me off this e-mail list!” Others will respond to that by saying, “Stop responding to all!”

I expect my response to all will quickly generate a global craze; soon thereafter, the craze will morph into a cyber-nightmare, as waves of resulting email traffic ties up the internet for weeks; eventually, future generations will come to see that the experience just happened to be the most magnificent and oversized work of art in the history of the planet. Art-scientists will inspect 50-year old “satellite dumps” of the digital traffic from 2013 and convert the information into shapes and patterns (or something) so that the piece can be understood by people from nearly every walk of life as “cyber art” and not mere “cyber craft”.

Volunteers will lobby to have the piece inducted into the “Art Hall of Fame” (at Turning Stone Casino?) by sending an e-mail to everyone on earth promoting the idea, and asking each recipient to provide "the favor of a response" indicating they actually understand the art. Included in the body of the email will be text that reads “please don’t reply ‘to all.’” And of course, millions of numbskulls will reply to all anyway, and then others will remind everyone not to reply to all, and so forth.

I get Red Sox tickets every year; until recently, I bought exclusively in the bleachers. Why bother with Fenway’s right field grandstands when the bleachers offer a much better perspective, and who wants to spend $55 (minimum) for a 3-year old to sit in the infield grandstand when he will watch just as much of the game (none) from 450 feet away?

But now my son is nearly 8 and, with a second year of little league under his belt, he gets the basics.  He can follow games and keep the book from center field, but frankly it’s easier for him if he’s in the infield. Still, we're not going to fork out $200 plus all the fees for 2 seats in the loge box, which means we’re in the grandstand. As we've all heard, Fenway is America’s most beloved ballpark, and by extension, the infield grandstand at Fenway is America’s most beloved infield grandstand, so it can’t be all that bad. So far this year, we’ve had infield grandstand tickets to two Sunday games, and as a result have gotten really awesome views of historic Fenway Park's architecture. 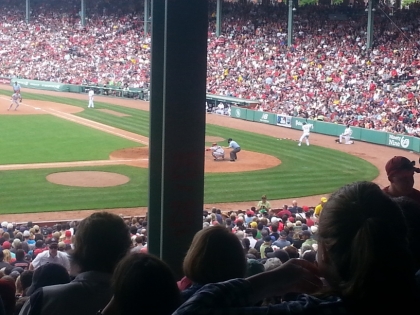 Credit for the above picture caption must be given to the America’s most beloved unnamed acerbic high school principal, who probably should get credit for today’s whole blog post (or, more accurately, the blame.)

I think I’m ready to start a family band. Look at us – we’re so darned awesome in our matching pantsuits! My five year old daughter serves as frontgirl. Her microphone-swinging is positively Roger Daltry-esque, and she does an amazing impression of Beyonce dancing (whose performance during halftime of the last Super Bowl was declared to be “much better than the baseball game.”) She does not sing, though, which is a good thing.

My son plays the pickle jars. He is an expert at dissonance, such that the listener assumes he has never set foot in a music class in his life. Not true! His style is heavily influenced by Beck, I believe, the main difference being that Beck’s occasional dissonant sounds are much more interesting than my son’s. The recycled jars of Nathan’s kosher halves, which are filled with varying amounts of water, create the exact dissonance my son is aiming for. He also plays Nathan’s Sauerkraut jars, as well as random collections of spent beer bottles I always seem to have lying around, and the cat.

My wife is on the computer keyboard. Her lightning quick typing sounds are no different than those one might hear on any given day in the office. Sometimes, when we’re onstage in front of large crowds, I glance over at her to signal a key change, and find her eyes darting across her laptop screen in a way that is entirely consistent with reading e-mail or reviewing a work document. And then she begins typing again rapidly, as though she is responding. It’s cranked up loud and the fans love it!

I, of course, do the vocals. I am hidden in the darkest recesses of the stage shadows, except I sometimes light an e-cigarette, which tips the fans off to where I am, or drink a bottle of e-wine, which glows a deep reddish-purple hue and envelops me in its warm radiance. I don’t sing as much as talk, reading verbatim from highly-praised high school valedictorian speeches and/or the Bible. Sometimes, I catch up on Harpers during a performance, reading in a highly stilted manner with virtually no tonal variation.

We become wildly rich and famous, darlings of fans and critics alike, and ultimately the wealth tears us asunder. But we patch up our differences by the year 2030 and reunite for a benefit tour aimed to replenish the coffers for mom and dad’s inevitable stumble into life’s “golden” years.

Need to find an agent.

Visiting the employee refrigerator at the office to deposit my bag lunch, I come across a Styrofoam plate bearing yesterday’s – or is it last week’s? – catered chow: crusty chicken legs with a chunk bitten off; bits of picked-over macaroni and cheese; limp broccoli; brown(ish) rice with the corpse of a yellow caterpillar atop it (no, wait, that’s more mac-and-cheese). The routine around here is familiar: the caterer arrives at 11 in the morning and leaves food to be served at noon; at 2:15 the meeting adjourns; by 3, room-temperature leftovers have been plunked onto a side table to be scavenged by passersby; at 5:30 or so, an invisible angel of thrift scrapes the remnant morsels from several foil serving platters onto a single plate and quietly slips it into the fridge, unlabeled and uncovered. There, the “food” is destined to age for several weeks, until, finally, another angel takes it upon him or herself to lay the shrunken mass to rest. All in all, this is better than witnessing someone eat it.