I’ve spent all of my adult voting years in the greater Boston area, where most candidates for national office either run unopposed or get challenged by hapless, no-name conservatives. Still, though you might know the outcome of an election in advance, how an individual votes is intended to be kept secret, notwithstanding the people openly trumpeting their leanings by posting yard signs or throwing boozy “meet the candidate” parties.

For years, my various polling stations all used huge mechanical devices for voting, where you’d step in and throw a lever to enclose yourself behind a curtain, cast your ballot, and then, if you had a few minutes to kill, could play with the controls and project a fiery Wizard with a huge skull onto the wall to freak out your fellow citizens. 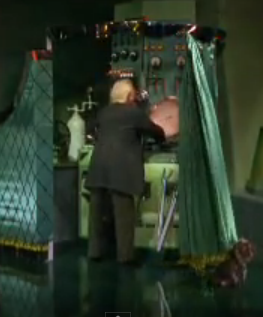 The voting booth, as I recall it

Then came Florida, 2000, with its hanging chads and tossed-out votes. Though Boston’s machines seemed to work just fine, they were dismissed in favor of paper ballots, and so was the clandestine nature of the vote. No need for Toto to pull back the curtain, as curtains were done away with in favor of open-air triangular booths that expose the voter to a nearby line of observers, who wonder why one would study the full text of ballot questions that had been available for months online. Afterward, with two completed 11 by 17 inch ballots of candidates and initiatives in hand, the voter is instructed to put the ballots into “secrecy covers” that are -- no kidding -- half the size of the ballots themselves.

In my case, I brought my half-exposed ballots to the reading machine, where I was met by two volunteers, one of whom was a neighbor from 5 doors down, who "helped" me insert the ballots into the machine.

In getting regular updates about the wine scene in recent years, I’ve come to know who the bad boys of wine making are. These enfants terrible of the industry create fantastic, complex wines, and then drink virtually all of it. What they fail to get through is bottled as “riserva.”

This has made me ponder what I might be the bad boy of.   What have I created and then drunk almost dry? What leftovers have I marketed as “riserva?”

Sadly, nothing. This embarrassing realization, which occurred last winter, was something of a wake-up call to me. I could either maintain the status quo and go through life this way, creating virtually nothing original and interesting to drink, or I could finally admit to myself and my family (tearfully) that I was never going to be a bad boy like Phillipe Cambie, the so-called bad boy of the Rhone Valley, unless they bought me a beer making kit. With the tools of beer making in hand, I could set out to craft brews of my own and then drink them, thereby becoming a sort of bad boy in my own right. If I somehow didn’t end up drinking all of the beer, I would give one or two away to friends and call it “riserva.”

Finally, my family heeded my pleas. In a gesture of mercy (or maybe pity?) I was given all the gear needed to create my very own effervescent beverages of the hoppy sort.

Hurricane Sandy, the behemoth of a storm that recently slammed into the eastern seaboard and inflicted untold damage from Virginia to Maine, coincided not only with a full moon, which caused higher-than-normal tides, but also with our own longstanding plans to refinish an old coffee table. This essential piece of living room furniture has made its home in front of our sofa since 2003, when my wife and I married, and I can attest to its unswerving ability to hold up my aching feet while I watch ballgames or read the Sunday Times.

Its physical appearance, however, long ago lost its charm. The arrival of children soon after we married forced us to encase the entire perimeter of this table in an inch of soft foam in order to keep the little ones from losing eyes or teeth. Now that they are old enough to lose eyes and teeth on the soccer pitch, it seemed like a good time to remove the foam and give the table new life.

My wife took on the thankless task of boiling off the old finish with eco-friendly products, which made but a dent in the double-sided “tape of the future” that had kept the safety foam in place. I then swooped in heroically with my power sheet sander and the little bit of elbow grease that I still possess to grind the table down to bare wood. We fussed with it here and there for another couple of weeks, wasting precious time, and finally deemed it ready for new coats of finish just as Sandy was angrily making her way up the east coast.

When storms of this magnitude approach, shoppers are meant to participate in panicked runs on bread, milk, and eggs in case they want to make a hearty breakfast at 8 at night. They are not, I’m sure, supposed to ask the grocer how to deseed a pomegranate, or if there are any jars of unground cardamom pods “back in the warehouse.”

Similarly, I discovered, upon visiting the local hardware store on Saturday as the hurricane raced up the coast, that one should leave questions of polyurethane-to-naphtha ratios and the pros and cons of synthetic vs. natural steel wool to those rare moments when the store owner isn’t looking to unload the last of his power generators and sump pumps. He will appreciate it, as will the long line of your fellow hardware consumers.

In the early part of this century, it was not uncommon for the workplace to contain devices that allowed one to apply dry heat to food in order to lightly char the surface. The idea was that this gentle scorching would impart a nutty scent and flavor to one’s meal. Bread, in particular, was considered to undergo a marked enhancement in smell and taste quality when subjected to dry heat.

Then, seemingly out of nowhere, fire officials teamed up with the generally paranoid to make the devices in question, called “toasters” or “toaster ovens,” illegal in the workplace. The idea was that if employees wanted to heat their food, they should make use of the microwave oven (no matter that microwaves apply heat to the inside of food instead of just the outside and probably cause cancer!). In any event, from then on the only toasting allowed in the workplace had to happen in a professionally-managed kitchen.

Recently, a couple of young, hotshot social scientists I happen to know at a prestigious university in Cambridge, Massachusetts (not MIT), conducted a study in which toasters were reintroduced into offices in highly controlled settings with fire extinguishers at the ready. These two fine young scholars have been able to demonstrate that the emotional wellbeing of employees across a broad spectrum of industries improves if they are able to eat toast at work. By this I mean they are able to eat toast whenever they wish, whether it be at traditional hours for toast, like 8 in the morning, or later in the day when a person might be famished and dinner is still a few hours away.

But that’s not all. These future Nobel laureates, whom I have agreed not to name because they don’t want anyone to know that they know me, have been encouraging me (or, frankly, goading me) into demanding a reintroduction of toast into the workplace, via public chant.

With this in mind, I'm planning to lead a chant of "We want toast!  We want toast!" each Monday at noon.  Ideally, people across the globe will put aside their petty differences and/or sleep for a minute to join me in this critically important endeavor.