Biking through the winter months in Boston has never been for the faint of heart. Beantown motorists are a frazzled enough bunch in pleasant weather; in the full of grip winter, having some dude on two wheels taking away part of their shrinking lane can make these people snap and draw their weapons. But the last two warm winters and the increase in well-marked bike lanes have emboldened formerly fair-weather riders, such that now I don’t look like a lonely outlier with nerves of steel or bona fide psychosis when I embark on my morning commute in the middle of January.

Last Wednesday, Boston experienced an increasingly rare winter event – actual snowfall – which gave me the opportunity to use the new wheel I had spent untold hours and lots of money building up. This wheel was already fitted with a cyclocross tire, which would be perfect for the wet, packable stuff that was falling from the sky.  By the time I reached Jamaica Pond at 7:45 in the morning, the bike path had already seen plenty of action, despite the snowsquall. After all, biking in the snow is much more agreeable than sitting in a car, stopped. 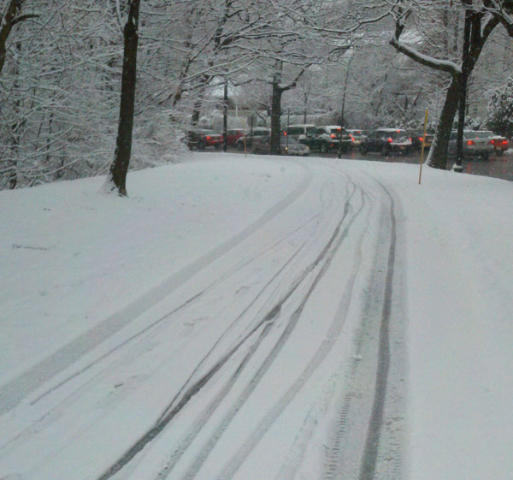 Evidence That I'm Not Alone

Maybe this winter will morph into something more like what we got 3 years ago, when the snowfall was measured against Shaquille O’Neal’s height and led to hazardous, crusted-up lanes. If we get 7-plus feet again (we won’t), I expect the number of bike commuters to drop substantially.   I intend to press on through whatever mother nature throws at me this year because I’ve become addicted to this pollution-free and speedy means of travel. To wit, I made a recent visit to Gillette Stadium in Foxborough for the AFC Championship game (sniff, sniff), and might have been the only person who did so on two wheels. I rolled by hoards of tipsy former tailgaters who were hoofing it for more than a mile from their cars to the stadium, and eventually locked my bike within a stone's throw of the field (I have quite an arm!).  Of course, after the game is when having a bike is most useful, as you wind your way through 55,000 people idling in their cars, waiting to get onto route 95. It’s almost (but not quite) enough to reinvigorate a person who has just witnessed his team get beat.

Tweet
Idea for Radio Play: The Cook, The Thief, His Wife...
Gun Farce