I recently fantasized in these pages about brewing a mustard ale. Imagine being the first person in the world to acheive a particular feat, as I was scheming to do by brewing a beer using mustard. Pride would have dripped from my pores like mash through a sieve. Alas, I’ve once again learned that when it comes to beer, never claim you can beat the Belgians at it.

My mustard ale would have had 8.0% alcohol

I suppose it’s time to rethink my next beer and moniker. Perhaps “Horseradish Pat” is where I should be headed. Next task: brew horseradish ale.

A kind of death happens when your basketball team loses in the Final Four. It’s not quite like biological death in that the humans who comprised the squad continue to breathe and all that, but the team itself no longer exists and never will again, and you feel as though you lived and died several times during the game. Even if there is a consolation match left to play, it’s entirely irrelevant and will likely include benchwarmers who never would have appeared in the championship game anyway, had the team gone that far.

This was to be a synergistic year for the Syracuse basketball Orange, in my mind. The last time they played in the Final Four was 10 years ago this weekend, when they won it all for the first and only time. I was in Italy when it happened, listening over the internet to the semi-final game in the lobby of our hotel in Siena and, two days later, to the final in some airless common room in our hotel in Florence. The championship game ended at nearly 6 in the morning local time when Hakeem Warrick blocked a 3 point shot by a Kansas player, and later that night I asked my girlfriend to marry me. As weekends go, it was a pretty good one.

Whenever my teams end their season with a playoff loss (as the vast majority of our teams do), I remind myself to be an adult about it and try not to care. Sometimes, I go so far as to declare that I’m done with watching sports, which, of course, is the opposite of not caring. There are plenty of reasons to abandon the pastime of watching other people get exercise and have fun, notably that it sucks up huge chunks of time, but not watching because your team probably won’t win the ultimate game is essentially about avoiding pain.

I keep watching because the joy of a rare title game victory trumps the hurt of watching the other fans celebrate year after year. Alas, there wasn’t perfect synergy this year as I had hoped, but I still have the memory of ten years ago, when the Orange were crowned national champions, and my girlfriend became my fiancé.

Pat of All Trades

The tools of my father’s trade – pencils, adding machines, Redweld folders – earned him money as an accountant, but didn’t help much when the roof leaked or toilet clogged, which they did regularly. My mother recognized his limitations and decided that I, her lone male child, should acquire some of the blue collar skills that my father lacked, in part so that she didn’t have to fork out $120 for a guy to haul his half-exposed bottom to our house when the sink got stopped up (plus an additional $85 an hour and the inflated cost of parts). I therefore learned some plumbing, carpentry, electrical work, and, later, some light automobile maintenance, mostly via trial and a great deal of error.

I gave up virtually all car repair tasks at a certain point in my adulthood, realizing that the trade requires not just specialized skill, but also lots of tools that cost more money to buy than having someone else do the work for you. Who among us didn’t try to change his own oil and filter at least once “to save money,” only to find that he’d saved nothing, least of all time, after buying an oil pan, funnel, and filter-removal tool. Plus, there was all that oil sitting your garage for the next 3 years.

Which brings me to this point in my tradesman history, in which I find myself once again attempting to learn a new skill in order to “save money,” this time bicycle repair. Having undertaken the very benign task of replacing my bike chain, only to find that this has caused my bike to stop working because the new chain slips on the worn crank, I’ve bought myself some specialized tools to replace the crank and, as the bike mechanics suggested I do at the same time, the “bottom bracket,” an essential part that I now believe I may have stripped and, therefore, ruined. Oh, the part doesn’t cost much – maybe $30 – but if you can’t get it out of the bike, the only solution is to get a new frame, i.e. a new bicycle. At least I can assert, with genuine honestly, that I have learned something new yet again.

I’m not what you call a breakfast cereal fanatic, but I like to pad my morning meal of whole fruit with a bowl or so of some grainy, crunchy stuff, often granola with nuts and raisins, and sometimes something puffy and ricey and a bit sweet. Lately, I have been looking at the labels and selecting cereals that are lower in calories in an effort to trim down a bit. Enter the cunningly named “Ezekiel 4:9” after the bible passage that urges Hebrews of yesteryear to make bread with ingredients as hard as stone.

The trickery is not in the cereal itself, but in the pricing, which must have been arrived at by imagining the cost of the ingredients in 590 or so B.C., then adjusting for inflation. I tend to multitask when I visit my local overpriced market, calling friends or reading spam whilst selecting my cereal, and not always remembering to check the cost of spelt-infused varieties. In this case, it wasn’t until I was back at the office and had open the box that I noticed that Ezekiel 4:9 cost me $9.29. (For 16 ounces). 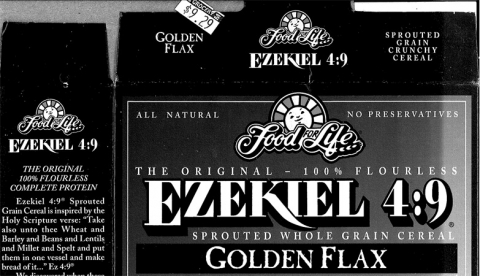 On the bright side, lots of millet became nestled in between my teeth, which fed me throughout the morning and kept me from getting hungry.