I’ve always wanted to write a gritty, lurid potboiler, but have never found the potboiler inside me. I’ve heard that great writers knock these off in about a week if given sufficient quantities of cigarettes and booze, so I’m planning to head to the local “packy” to snag a carton of smokes and some local moonshine in order to knock off a potboiler and make tons of money.

My potboiler involves Jake, the narrator, a hard-drinking, old-school newspaper man, who does a profile of Janet, the highly-paid president of a college you’ve never heard of in flood-prone, coastal Massachusetts. Despite her position of leadership and respect, Janet is saddled with Richie, a total schlub who’d latched onto her when she was just a fledgling postdoc in some esoteric something-or-other humanities discipline, and somehow tricked her into marrying his lazy ass. Sure, he was once a hot-shot taxi driver who knew all secret routes to get you around the hellish traffic in Salem, but of late he has fallen from that lofty perch to settle in as a layabout who doesn’t lift a finger to produce income or manage the house.

Janet keeps her cards close to the vest in the two-hour interview with the Jake, but clearly sends out chemical vibes to the gruff reporter. Jake has met total babes like Janet before, and senses that she’s probably an emotional disaster. The day after the interview, Janet calls Jake back, claiming that she had left out some important information during the interview, and how’s about getting together for drinks? Their subsequent gin-infused rendezvous causes the sparks to fly between them, and they end up heading back to Jake’s for a steamy encounter of the sensational and kinky variety. Jake acts like, hey, awesome!, let’s see each other every now and again, but Janet is ready to dump her husband immediately in favor of Jake. Janet is a zillionaire from a having published a couple books and doing speaking tours and all that, and tells Jake that she’d be forced to pay Richie about half of her ample fortune if she were to file for divorce. But what are the options? She can’t stand to be with such an emotionally abusive jerk any longer!

Layered under the story are reports of an impending storm, and as the potboiler progresses, Janet becomes convinced she can murder her husband during this wicked snowstorm, and ropes Jake into her wicked game plan. Jake knows he should call the cops, but he’s fallen for Janet and agrees to the following evil plot she concocts as it becomes clear the storm is going to be a blizzard of epic proportions accompanied by a nasty tidal surge: they’ll spike Richie’s lunchtime tankard of ale with a drug sure to cause a heart attack, and then call 9-1-1 during the height of the storm, when it will be impossible for emergency vehicles to get there. The whole plan seems to work great, as Richie collapses from his chair, grabbing his chest whilst chunks of chewed-up tuna sandwich fall from his mouth. His gaze locks onto Janet as he reaches out for her hand, but instead of helping she kicks him in the gut, and then he expires. The plan seems to have gone exactly as planned, except the emergency crews arrive at her house in a flat-bottomed boat in minutes, and – wait a minute! – Richie isn’t dead yet!

The expert emergency personnel revive Richie’s stupid ass, and tests at the hospital reveal: he’s been drugged! Janet is eventually arrested, implicates Jake, and Richie becomes destined to live off the estate for his remaining years of life.

I recall going to “clubs” when I was a younger gentleman, by which I mean nightclubs with long lines and cover charges. Once finally inside, I’d spend some of the little money I had buying colorful drinks for the gals and attempting to move my body in a way that might be construed, by very generous people, as dancing. Most of the time, I went to these clubs to please women. Not random women on the street, who couldn’t have cared less that I was off clubbing, but young women in my circle of friends with whom I might have been hoping to become closer. Nothing else of consequence ever happened, except that my female friends sometimes gave other guys their phone numbers.

At some point, I must have realized how silly the whole club scene was, with its goofy costumes and deafening music. By my mid-20s I stopped going to clubs altogether. However, my wife and I were recently vacationing in Puerto Rico, and our status as guests of the El San Juan hotel gave us access to “La Bamba” or some such inanely named nightclub. Signs in front of the club indicated that getting in wasn’t as easy as just having a pulse: admission was completely at the discretion of the manager. But after producing IDs and identifying ourselves as guests of the hotel, we suddenly had VIP privileges, which meant we could go in and drink their overpriced vodka.

Entering at 10:30 sounded kind of latish in our world, but once in we found the place empty, save for a triad of young ladies sipping drinks and not talking to each other, which we joined them in doing. The club was open until 5 a.m. my wife explained to me. Things don’t really get hopping until, like, 2. We peered into our icy drinks and tried to make pithy comments above the din, waiting in vain for someone to take to the dance floor so we could join them and then tell the kids we had been clubbing. Half an hour after this charade began, we left and put our feet into one of the many hot tubs at the resort, which was, all in all, a far more enjoyable experience.

I love big snowstorms in the same way many New Englanders, in the middle of January, “love hot weather”: it’s great until it actually arrives in full force. Bare grass and temperatures more suited to cherry blossom season in DC than wintertime in Boston isn’t my cup of tea, so instead of wishing for two inches to fall to make everything pretty, I root for a major snow event to come my way just so I can prove that winter weather can’t lay a glove on me. And then, inevitably, the blizzard arrives in an instant like a stomach bug, and I find myself shoveling instead of packing for Puerto Rico. 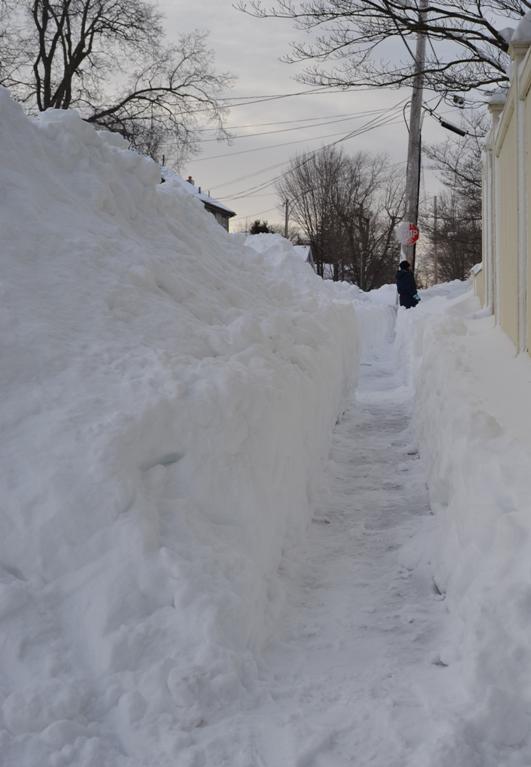 Shoveling is OK to a point, but when upwards of two feet of snow falls and your yard is barely large enough for earthworms to stretch out, the task quickly becomes tedious. The snow doesn’t just get dug from here and placed a foot away; it must be either thrown the way men of old would toss kegs of beer into horse-drawn carriages, or picked up and carried fifteen steps away, where there is a little more room on the snow bank. And that’s just to clear out the sidewalk and driveway. Getting from the back door to the road or driveway requires shoveling 12-inch-wide paths through the snow.

But I love snowstorms. Just ask me again in 2015, when it’s been two years since the last one.

News of “hairy crazy ant” swarms in the hundreds of millions led me to wonder if at any point in my life I have had a hairy, crazy aunt (no), or hairy, crazy uncle (no), or even a crazy uncle named Harry (I don’t think so). However, this got me to thinking about a sort of “black box theater” play someone should write. It’s about Harry, a Midwestern folksy guy in his late sixties, who loses his wife of 35 years and decides to pick up and move to New York. He arrives unannounced at the upper east side doorstep of his nephew, his only known relative, who hears the doorbell and spies the uncle from the window of his studio loft, where he’s banging some chick making passionate love to his fiancé.

The nephew can’t make out who the hell is down there ringing the buzzer, but he can see it’s a guy in a fedora, so clearly it’s not something he wants to deal with while his naked Israeli fiancé is there pawing at him. But then, the old man looks up and catches Ralph’s naked eye, and Ralph has no choice but to go down to see him.

Harry tells Ralph and Rebbekka (the fiancé) that Bea, Harry’s spouse of more than 35 years, has died, and he didn’t know what to do or where to go. Ralph is like, “You’re gonna have a great life, Uncle Harry. She was dragging you down anyway, the old bat!” But he’s misremembering this: the old bat was not his Aunt Bea, but rather his evil foster mother, whose name I haven’t yet decided on. Rebbekka is shocked by Ralph’s coarseness, and smacks him big-time, which is a problem because these two get hot for each other when they start slapping each other around.

Ralph and Rebbekka put Harry up for the time being, expecting that it can’t last long, but the days stretch into weeks, with Harry lying around in his boxer shorts and dark socks on the sofa where he’s crashing. Slowly he descends into a kind of couch-and-tv-fueled psychosis. Having this crazy old lump on the couch is a huge bummer, such that Ralph and Rebbekka snipe at each other and sometimes smack each other around, which makes them want to go to bed together, which just makes things worse because they can’t with the old man hanging out in their partition-free loft. Finally, Ralph learns that Harry is sitting on a cool 5 million dollars from some very savvy investing and divesting, slaps him around little, and finds him his own pad to rent.

Sparsely set, this play will make use of spotlights on the three characters, and well as rumbles of thunder and sudden bursts of lightning that blind the audience (just to mix it up a little). Note: the actors will be required to perform nude during some of the lightning scenes, such that we glimpse their bodies for fractions of seconds before being blinded for a quarter of a minute. The two young actors playing Ralph and Rebbekka should have hot bodies.