This play I'm going to write is a farce in the traditional sense of the word: a comedic fugue, it is populated by pretenders, dunces, and asses; lots of doors are involved; there are several cases of mistaken identity.

The setting is a medical office building in a Brookline brownstone. Characters from every segment of society intermingle as they come in and out of the building to see doctors, dentists, shrinks, etc. and exchange pleasantries – or not – with the security guard in the lobby.

One thing we quickly discover: everyone is packing heat. Guns keep going off inadvertently, shooting out a lamp right next to a dozing homeless guy who's allowed in momentarily to warm up, blasting the hat off the bald, blowhard Doctor Mump, who keeps giving the wrong advice to teenage girls about acne. Needless to say, the mingling of these nutty, gun-wielding characters is hilarious.

The security guard is named Marcel. He’s French Canadian and a little down on his luck. Most recently, he worked security for the Canadian strategic maple syrup reserve, but for obvious reasons lost that position. Marcel takes the loss of that plum job in stride, believing that he can turn the experience into fodder for a play about the funny people you meet working security in a U.S. office building. Like everyone else, he’s packing a piece and is ready to draw at a moment’s notice, but his aim is bad, and he ends up hitting lots of light fixtures and the occasional ear or pinky finger. (Marcel is also tasked with replacing the light bulbs that keep getting shot out and calling for an ambulance when someone loses a toe to an errant bullet.)

At the climax of this farce, a teenager with a scarf around her face, which conceals the hideous results of an improperly prescribed acne drug, finally corners Doctor Mump and draws her gun, just as he draws his, Marcel draws his, and the people in the elevator that just opened up draw theirs. In quick succession, guns go off and everyone is hit, except Marcel, who walks away unscathed with a great script!

The Status of My Beer

My beer is rapidly approaching the bottling hour, and soon thereafter Zero Drink 30. I’m looking for a name for it. Current Ideas:

I’m leaning toward Mustard Pat’s Speedy Ale. It evokes swiftness, mustard being a metaphor for throwing a ball with increased velocity, as in “put a little mustard on it!” The slogan for the beer could be something like “The beer to chug when you’re in a hurry.”

Winter Pat’s Mustard Ale is another good option. I might be able to sell a few bottles to curious people wanting to know what a mustard ale tastes like. “It’s awesome!” I’ll tell them, having no idea. The beer won’t contain a single grain of ground mustard, and people will drink it and like it. Obviously, calling it mustard ale but not including any mustard in the making of it is deceitful, but imagine if I actually put ground mustard seed into the mix. People would say, “It tastes like mustard,” and I’d have to say something like, “Yes. It’s Mustard Ale.”

Speedy Pat’s Winter Ale has the disadvantage of making it seem like I'm prone to rush the beer making process. What the hell’s the hurry? Make enough to get you through until the next batch has properly aged. That’s the way the big boys do it, and I’m a big boy.

Which brings me to a final option, which is just occurring to me now: Shifty Pat’s Swift Ale. Shifty because back when I played Pop Warner football, I had a coach who told me I should be a halfback instead of a fullback because I was “shifty.” (I have no memory of anyone else telling me they thought I was shifty, but perhaps someone has said it behind my back, like some ex-girlfriend’s grandmother: “Oooh, he’s a shifty one, that Mustard Pat!”)

Everyone should be an expert in some field or other, and I’m thinking that my field of expertise should be mustards. After all, mustard and I go way back. My early days of spiced ham and cheese sandwiches were slathered with Gulden’s spicy brown mustard, though in our local minor league ballpark and at the concession stands of my Pop Warner football games, the more ubiquitous French’s yellow mustard was offered. Even as a young boy, yellow mustard seemed unremarkable and lowbrow to me. The brightness of the yellow, in particular, seemed to indicate the absence of subtlety and perhaps a dose of food coloring (but hey, it improved a hotdog, so if it was all that was available, I used it).

In my teen years, my parents converted to the religion of Dijon mustard, no doubt thanks to the marketing geniuses behind Grey Poupon. With deep Quebec roots, kids like us thought of ourselves as French (to the dismay of actual French people), and I wonder if my parents bought into the notion that putting Grey Poupon in our fridge made us kindred spirits with chauffeur-driven French elites who ate 3 course meals and passed the wine-infused condiment from one Rolls Royce to another. 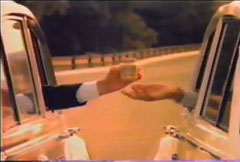 But would they have passed it to a guy in a '76 Dodge Dart?

One thing that confused me about those commercials was that the narrator always pronounced the “n” at the end of Poupon, sort of like “don’t let the dog poop on the carpet.” Even those of us with complicated and circuitous connections to France knew to eliminate that last consonant sound.

The world, of course, is filled with mustards beyond Gulden’s, French’s, and Grey Poupon, and I intend to explore the many varieties and devote a page of this website to rating mustards on a scale of 1 to 100. Anything 90 or above is very high-quality mustard, worthy of Mustard Pat’s “Golden Seed” award. First up: Inglehoffer hot Dijon mustard, which I will sneak into the next mustard, feta, prosciutto, and saurkraut stuffed chicken cutlets I make. Reports to follow.

I’ve always wanted to be a tough guy, if just for a day. Not a jerky tough guy who bullies smaller folk, but a gentlemanly sort of tough guy, who cheerfully opens doors for people and is quick with a friendly “hello”, but also is quick with his fists in a pinch – i.e. not me. (Oh, sure, I’m fine with doors and all, but fists? No.)

But in my role as lead time-waster in the family (i.e. the family “writer”), I am regularly required to come up with a new way to make a zillion dollars, and therefore will begin developing a TV series with me in the role of Rick Swat, the lead character in this gritty, tough-guy drama. Rick, who dresses sharply (also not me) and is always a gentleman, works in a corporate financial office and has become embroiled in an apparent white-collar criminal enterprise, the tentacles of which grow before our eyes. Rick is anguished by the scandal because some of his good friends are apparently involved, including a woman he has a wicked crush on, who is both beautiful and ultra-smart, holding an advanced degree in economics (and maybe something else!). Always the gentleman, Rick continues to open doors for "Candy" (unlikely name for someone with a Ph.D. in Economics, but I like it) and other felonious “friends” whenever it’s convenient.

The feds pressure Rick into becoming a paid informant, and when he doesn’t deliver enough hard evidence, they lean on him big time. He hates those federal bastards and doesn't want to turn evidence against Candy because she's such a hot babe!  As he investigates the huge international financial scheme, he finds himself needing to kick people’s asses here and there. This white-collar criminal enterprise has, you can imagine, a dark underbelly, where lowlifes looking for trouble inhabit seedy parking lots and need to be taught lessons by gentlemanly tough guys.

I've still got to work out some details:  1) Does he open doors for the seedy parking lot inhabiting low lifes?;  2) If he’s getting in street fights, wouldn’t that show at the office? He’s bound to sustain a black eye or broken ribs. How would he hide that?; 3) Lots of other stuff.