A Battle Pitting the Halves v. the Have-Knots

I don’t usually like to talk politics during your breakfast, which, I assume, is when you’re reading this, but I feel like it’s time I weigh in on one of the critical political contests going on. I recently learned of the heated presidential race pitting – let’s see if I’ve got this right – Hussein Osama, the apparent incumbent (sorry I’ve been out of loop in recent years – when the hell did George "Dubya" Herbert Walker Bush leave?!), against former National League baseball great and governor of both Massachusetts and Detoit, George “Mitt” Romney. As usual, the campaigns have been hijacked by political strategists and operatives who are either threatening to “put America to work” (What is this, North Korea? Do your own damned work!), or are out to divide the country into two groups, with extremely short people on one side, and those who know how to tie a half hitch, at minimum, on the other (sorry bows don’t qualify).

And they wonder why people are sick of politics!

People are constantly looking for evidence of the existence of God, and contemporary singles are no exception. Benjamin Franklin is famously misquoted as saying that beer is proof that God loves us and wants us to be happy, when in fact he was talking about cleavage. 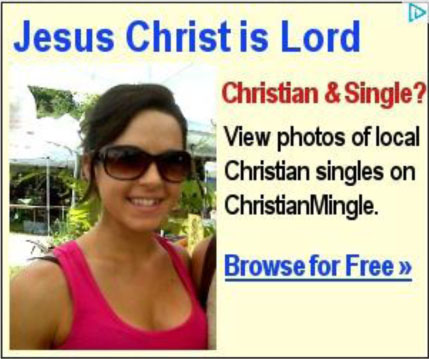 This depiction of “The Christian as Babe” is further confirmation of the existence of God and His incredible ability to sculpt the human body, even better than Machiavelli, who sculpted the statue of David.

It occurs to me: I would be happy if my kids became artists; sculpting is an honorable art form; therefore I should give them sculpting lessons, preferably from someone who has learned to sculpt from God. I’ll be back…

Hmmm. Okay, I just looked into it, and it’s going to be harder to find somebody who learned sculpting from God than I thought. So far (in, admittedly, just ten minutes of web surfing), no one has claimed to have actually asked God and how to sculpt. I find this extremely odd! You’d think someone, somewhere, would mention it at some point.

Welcome to the Neighborhood

If you live in New England like I do, the coming of fall brings to mind crisp weather, hot apple cider, and here and there a ghoulishly carved pumpkin. I remember mom tying a triad of colorful ears of Indian corn to a nail on the front door and setting out gourds on the dining room table, and if memory serves she would also tape a flimsy cardboard black cat to the living room picture window, which was about as spooky as we were allowed to get in our Catholic household. Dad got the job of handing out candy to the neighborhood kids, the less appreciative of whom might return later in the evening to stick a potato in our station wagon’s tailpipe as a sort of asphyxiating gag. By morning, the fun and games were over, and we’d get dragged off to church with sugar hangovers because it was All Saints Day and mass was mandatory.

If my conservative upstate New York parents were alive today and had occasion to visit me around Halloween, they’d be shaken at some of the over-the-top decorating antics you find in the community these days. Not content to turn their yards into old-fashioned burial grounds with chintzy Styrofoam headstones bearing “R.I.P.” epitaphs and here and there a witch on a broomstick, these people display faux dismembered body parts and erect full-size prison cells with the rotting remains of tortured prisoners still chained to the walls. Here you find a bloody guillotine 12 feet high; there a corpse impaled upon a stake. Not only do my own children find some of the images unsettling, but I suspect that invading aliens from distant planets, upon viewing the spectacle, might be prompted to reach for their intergalactic vomit bags.

Sometimes, amid the swirl of daily life, my four year old daughter will report that her friend “Sally” is visiting. It’s never clear when Sally arrived nor when she intends to depart, but that’s to be expected when you’re dealing with a child whose background is as shrouded in mystery as Sally’s is. This invisible girl reveals as little as possible about herself, including where she is sitting from moment to moment, such that I am occasionally scolded for planting my fat parental bottom right on her. The little we know of Sally has emerged from interviews with my daughter, who has disclosed that her friend lives with grandparents because her parents have died, though of what it’s unclear. We know that Sally is the same height and age as my daughter, and, in all likelihood, has a similar inability to remember the babysitter’s name.

Recently, we took the kids to Storyland in New Hampshire, and when I was getting them ready for bed, my daughter informed me that Sally had dibs on the bottom bunk. After that, she was never again mentioned, and it occurs to me now that I might be accused of having left the defenseless lass at the rental condo with nothing to eat but two overpriced bags of granola that I forgot to pack, and a head of lettuce that by now may be rotting in the crisper. Perhaps my daughter will confront me about this at some point, and I’ll suggest that Sally’s grandparents spirited her away while my daughter was having an extended visit to the bathroom, as she likes to do. One thing we know: Sally didn’t make the trip to the Flume Gorge.