As of Tuesday, January 29, 2013, the Boston “Globe Reader” became a thing of the past, a relic of publishing history that had a brief life of – what – maybe five years? The Globe Reader was an installed program on your computer that delivered the Boston Globe newspaper to your breakfast table in a easily readable format without any ads. For a while, it had been promoted to old timers like me, who still pay real money to have some guy (or gal!) drive the print version to their home and hurl it at the front door, where it sometimes decapitates the tulips and, rarely, lands somewhere close enough for you to reach out and snag it from the porch without the neighbors seeing you in footy-pajamas or curlers.

Not long ago, the industry relied on mere children to get the days’ news from house to house. Paper routes were a rite of passage for youngsters like me, who started when we were barely tall enough to haul the sack of dead trees without dragging it through puddles. I delivered the Syracuse Herald Journal in an era when small Midwestern* cities could support fat versions of both morning and afternoon dailies. We walked our route and were told by the customer where s/he wanted the paper delivered (such as in the side door of the garage, where the family hound would quietly wait in the shadows, then leap out in a ferocious attack on the poor paper and, sometimes, your hand). The worst part of having a paper route was having to go door-to-door once a week to “collect” cash from the customers, then fork over money to the newspaper company that was paying 2 cents per paper to deliver the route (I know it sounds like 1910, when a nickel would buy you a cobblestone-size block of cheese, but it was really the 1970s). You’d go and ring the doorbell and say “collecting,” and they’d say something like “We’re eating dinner. Can you come back?” When you’d return they’d be watching All in the Family or mowing the lawn with a cigarette dangling from their lips – too busy to be bothered with paying the 11 year old kid – so you’d pay the newspaper company on the customer’s behalf from past wages and then collect for two weeks next time, when, inevitably, they’d claim to have paid you already.

I don’t know why I’m complaining. I made some money and got to “meet people,” like roughneck neighborhood dirtbags who’d want to kick my ass for showing up on their street from the other side of the main road. Anyway, at 11, if you wanted money it was either deliver the paper or trap muskrats, which some kids would do before catching the bus to school. 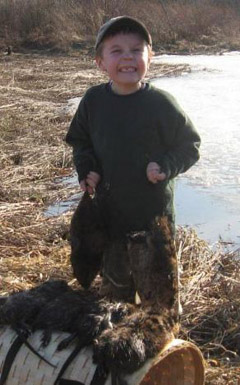 A not uncommon sight among the peers of my youth

I suppose I won’t really miss the Globe Reader, since I get the print version and can go to Boston.com to get the e-paper (if I could just remember my damned log in name and password). But for some reason that I can’t quite describe, I do miss the era of boys and girls ambling along the street in the morning or afternoon, pulling a wagon full of newspapers and sticking one of them between the inside and storm doors of each house. Soon, I'm sure there won’t even be guys in beat up sedans launching papers at front doors and decapitating the tulips.

*Syracuse, NY is, I contend, the eastern most city in the Midwest. Blog entry to follow, one day.

White Sale
In Times Of Uncertainty, There's Still Beer
Your Humble Servant
What Was I Thinking?
Lyin' Fool