Each year, my wife and I attempt to get away from the hustle and bustle of city life in chilly New England and jet off to some island in the Caribbean where warmth and rum drinks abound. This year it was Puerto Rico, which, unlike our Turks and Caicos visit last year, promised not only warm waters, but also the lush, forested geography of the central mountains. T&C has Grace Bay, the unparalleled beach of fine white sand on arrestingly turquoise waters, but inland, whatever isn’t irrigated by a hose turns to scrub. 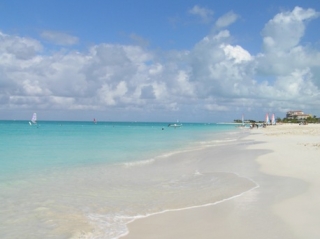 In the San Juan area, we gave ourselves a few days to lie around and hide from the sun’s UV rays at the resort, then managed to put some energy into renting a car and heading inland to take in the “Ruta Panoramica” – the series of roads that wind across the center of the island from east to west. One always has high hopes for these sorts of quasi-foreign road trips, imagining the startling vistas that await the adventurous soul, despite the fact that all the books say don’t look at anything but the road in front of you and drive around 25 mph.

The first bit of trouble on our escapade came almost immediately: we had been advised by Enterprise Rent a Car to use the electronic lane whenever we came upon a toll booth, and every time we did red lights flashed and buzzers went off. Once off the highway and heading up into the hills, we found ourselves stuck behind a huge garbage truck for mile after mile. Soon, we encountered more trucks, and eventually road work in the middle of nowhere. Once past the construction, we took the first wrong turn we could find and ended up in the unremarkable southern town of Guayama. We made our way back to the highway and through more flashing and buzzing toll lanes, and finally reached our lunch destination, the town of Aibonito, which had worse traffic than downtown Boston. We dumped our car and sought out a lechonera on foot in order to get a plate of the legendary Puerto Rican suckling pig; failing that, we landed at a so-so lunch spot outside of town called Tio Pepe’s. By then, it was just about time to head back to Isla Verde lest we hit serious rush hour traffic in San Juan. Too late, as no matter which back road we took, we were confronted with more traffic, including this noisy fellow:

The laughter you hear is mild bemusement borne of fatigue and exasperation. Thankfully, we had one more day to lie around and read our books, which was the reason we’d gone on this trip in the first place.