Last week, I took my daughter to a “pre-ballet” class, which I believed would give me an opportunity to watch her doing pliés and relevés. My mistake. The instructor shut the door between us parents and his gaggle of prancing five year olds; if I wanted to observe the class, it would be with my ears only. I tried this for a bit, listening to all that giggling. It sounded like the girls were having a great deal of fun.

I, on the other hand, was quickly bored. Why hadn’t I brought my book? Better yet my bike. I could have pedaled to the Longwood Cricket Club in 10 minutes, leaving plenty of time to observe the members, clad in tennis whites, enjoying a friendly doubles match on grass.

Instead, I used my feet to wander the neighborhood, quickly happening upon “The Old Burying Ground” on Walnut Street in Brookline. The signs and other literature near the entrance told me of fund raising efforts that kept the place from being bull-dozed, and encouraged me to explore the grounds and note the famous dead people there. Aspinwalls! Goddards!

And also Anna Mather, wife to Increase Mather, an early Puritanical figure of power and not a little notoriety, the rigid old bastard! Not only was Anna married to the curiously named former president of Harvard, but also gave birth was stepmother to the prolific Cotton Mather(see comment below), who infamously contended that if you were against the Salem witch trials, you were probably pro-witch. Witches back then were always getting bad raps for conjuring and so forth, and Cotton Mather cleared out some space in his very busy calendar to enjoy a couple of executions. 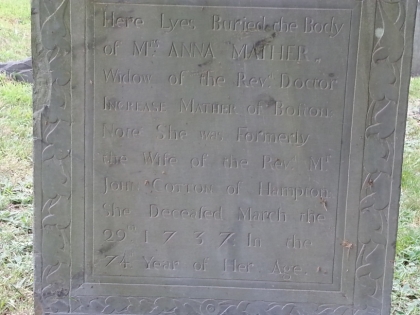 So my forty minutes of free time wasn’t entirely devoid of pleasure. With dead people like the Mathers to recall, and smart-phone access to Wikipedia, who needs a book?