My wife and I decided we would spend this Christmas holiday in a New York hotel rather than our cozy home. The thing about New York around the holidays – midtown really strives to entirely banish darkness. Times Square, in particular, has gone miles to blur the line between daytime and night. In a sense, the early morning daylight hours have perhaps the quietest light of all. The sun softens the effect of the giant screens that surround Times Square, which loudly depict things to drink and the bra’d and panty’d of the current generation. Not far off are somewhat quieter lights, with sidewalks that are merely crowded instead of crushingly packed. 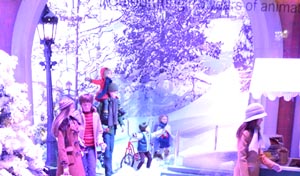 Winter Scene in a Lord and Taylor Window

We brought along a nightlight for the kids – they’re scared of what might be out there in the dark even though much of the horror happens in broad daylight – but that proved entirely unnecessary. You don’t need a nightlight when you can look out your window and see an animated, computer generated M&M advertisement, looped all day, 24/7, on a giant screen below. Crack the shade a hair at 9 p.m. and the room is lit up all night long. That’s some kinda loud!

At home, I have some recessed lights on dimmer switches. These are quite loud too. Because we don’t have power in the hallways, we can’t just stick a nightlight into an outlet, so we make use of dimmed lighting. This provides a beautifully soft, elegant light, and scares away the monsters. However, these “cans,” as they call recessed light fixtures in the business, emit a noticeable buzz when fully aglow. As you turn the lights down, the buzz gets louder, until they are screaming at you at 2 in the morning. Eventually, one becomes inured to the noise, until one day the power goes out and you realize how pleasant the silence is.

I finally see a tangible use for all those noise-cancelling headphone offers I get via spam.