Among the very few things I remember from my first year of college was a flyer for the punk band Einstein’s Riceboys, which was posted on the campus of St. Lawrence University in Canton, NY, where I was badly botching my freshman year. (When I think about what a lost year that was, I wonder why it never occurred to me to take a year off after high school. Wait – that did occur to me! So why didn’t it occur to me to listen to myself?) 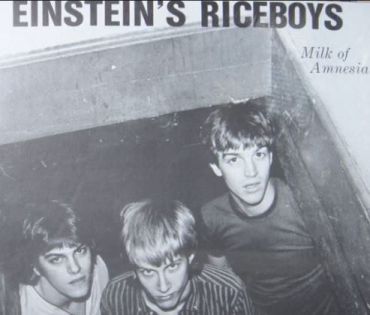 Not The Flyer I'm Trying To Find

Einstein’s Riceboys more likely came to the town of Clarkson, NY, some ten miles away, rather than to Canton, the bleak little dot on the frozen landscape where I was sentenced to a year of utter apathy.

The poster I recall was of the Riceboys’ headshots, cut and pasted (that is, cut crudely with scissors and physically pasted, not Photoshopped) onto the bodies of contortionists, then photocopied onto colored paper and stapled onto telephone poles around town. This was 1982 or 1983, when, if you had access to a computer, it was very likely introducing you to the concept of losing all your data.

What you see above is the cover of the band's first album, "Milk of Amnesia"; this is yet another example of Punk Rock's knack for producing more hilarious band names and album and song titles than any other genre of music.  I probably never actually saw the Riceboys, although from what I've read the singer was also the drummer, and I definitely did see, in the basement of one of St. Lawrence's many beer-steeped fraternity houses, a loud punk band whose blond haired drummer "sang" all the "songs."  (This is enough for me to claim that I might have actually seen the Wisconsonian punksters).

I'd love to know where Einstein's Riceboys played that year to ascertain if it's even possible that I attended the show. You can find Milk of Amnesia and some good Riceboys imagery at a blog called "Cheap Rewards" (and yes, I did ask Mike, the blogger, if he has a copy of the flyer, but, alas, he doesn't).   I managed to download the whole second LP, Civil Rice, at the site mkepunk.com (with MKE being an abbreviation of the city of Milwaukee, I believe).

But what's more important to me than the music itself is finding that darned flyer. The time may come when I attempt to contact one of Einstein's famed Riceboys in order to see if any of those flyers withstood the test of time.

Patrick, I was the Riceboy who cut out the heads and posted them onto the bodies of Indian Yogis. A woman in Milwaukee scoffed at us when we were hanging them on telephone poles and said we shouldn't be making fun of those people. I will ask someone if there might be any of those left in the basement.

0 Cancel Reply
Patrick, I was the Riceboy who cut out the heads and posted them onto the bodies of Indian Yogis. A woman in Milwaukee scoffed at us when we were hanging them on telephone poles and said we shouldn't be making fun of those people. I will ask someone if there might be any of those left in the basement.
Cancel Update Comment

Would love to see that, Todd! I'm hoping you return to this site and use the contact form so I can email you.

0 Cancel Reply
Would love to see that, Todd! I'm hoping you return to this site and use the contact form so I can email you. Patrick
Cancel Update Comment